Pompeii loses garden wall around House of the Moralist 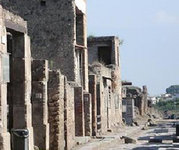 Just weeks after a similar disaster, another structure has collapsed in Pompeii and has raised new fears about the fate of the ancient Roman town.

A 25-foot-long garden wall that surrounds one of Pompeii's best-known houses, the so-called House of the Moralist, collapsed on Tuesday.

The building lies along Via dell'Abbondanza, some 65 feet from the ruins of the frescoed House of Gladiators, which crumbled into a pile of rubble earlier this month.
Both disasters at the site of the 2,000-year-old city, which was buried beneath volcanic ash in 79 AD, were said to be caused by torrential rains, Sify informs.

"These things can happen in a vast archaeological site that is 2,000 years old, especially considering the weather conditions we've had over the last few days," said Jeannette Papadopoulus, superintendent at the site.

Experts have blamed persistent, heavy rains over the past few weeks that have worn away ancient mortar between stones. Italy declared a state of emergency for Pompeii in July 2008, saying it was in serious disrepair.

But government officials deny the collapse of the Gladiator house was due to culture budget cuts. Instead, it blamed local management problems at the site, according to RFI.