Russia to build up nuclear forces, if USA does not ratify new START 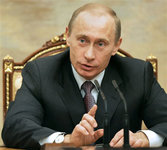 Russian Prime Minister Vladimir Putin is warning that his country will find it necessary to build up its nuclear forces, if the United State's doesn't ratify a new arms reduction treaty.

The treaty, called New START, was worked out this year amid praise that it marked a newly cooperative spirit between Washington and Moscow. However, many Republicans in the U.S. Senate are expressing reluctance to ratify it.

Putin, in an interview to be broadcast Wednesday on the CNN television channel, said that if the treaty isn't ratified, "we'll have to react somehow," including deploying new nuclear technology, The Associated Press reports.

President Dmitry Medvedev yesterday warned of a new arms race within the next decade unless Russia reaches an agreement with the U.S. and its allies on missile defense. Without such an accord, Russia "will have to" deploy new missiles, Medvedev said in his annual state-of-the-nation address.

Russia offered at the NATO summit in Lisbon last month to take part in a missile-defense system with the trans-Atlantic military alliance, though it insisted on being an equal partner.

President Barack Obama's initiative to "reset" ties with Russia has faced a setback since Republican gains in the Nov. 2 midterm elections stalled ratification of the Strategic Arms Reduction Treaty, according to Bloomberg.