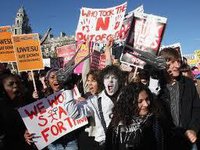 Several thousand British students protested Wednesday against government plans to triple tuition fees, two weeks after a similar demonstration sparked a small riot. College and university students across the country held marches and sit-ins to oppose the decision to increase university fees to 9,000 pounds ($14,000) a year, a key plank in the government's deficit-cutting austerity measures.

In London, the university students and younger pupils in school uniforms marched from Trafalgar Square toward the Houses of Parliament, chanting "no ifs, no buts, no education cuts.", The Associated Press says.

Two weeks ago, students stormed the headquarters of Britain's ruling Conservative party in a similar protest over tuition increases. They spray-painted anarchy symbols, broke windows, and set off flares before being forced out.

Some set fires and shot off firecrackers outside the building.

That violence marred what was otherwise a largely peaceful protest. The National Union of Students said 50,000 demonstrators were on the streets in that protest, CNN informs.