Dollar gains vs. euro, oil falls near $81 per barrel 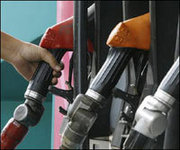 Oil fell to near $81 on Tuesday, as the dollar gained against the euro on fears that Ireland's debt crisis may spread in the euro zone, resuming its downward trend after a brief upwards blip on news of tension running high on the Korean peninsula.

Oil prices are expected to remain volatile ahead of the U.S. Thanksgiving holiday, several analysts said. "Many domestic traders (including ourselves) are looking forward to the Thanksgiving Day holiday this Thursday," analysts led by Stephen Schork said in a note to investors.

"Unfortunately, that evening's meal is often not the only turkey traders find themselves facing, as this week historically sees bad trades due to choppy high-noise markets."

"It is a big holiday week in the U.S., so market volumes will be low, with many traders gone for most of the week," said Mike Sander, investment adviser at Sander Capital Advisors, in a note. "I don't see much to be bullish about," he added.