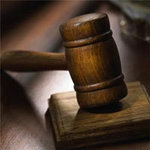 Trial of ten suspected Somali pirates opened at a Hamburg court in Germany on Monday, marking the first such trial in the European country in over 400 years.

The ten Somali men were arrested by the Dutch Navy after they forcefully boarded a German cargo vessel 'MS Taipan' some 560 miles east of the Somali coast in April. They were subsequently extradited from the Netherlands to Germany in June to face piracy charges, RTTNews says.

"It's a historic occasion," said Eugene Kontorovich, a maritime law expert at Northwestern University School of Law. "It's the first piracy trial in the United States in close to 200 years."

The five Somalis - scarecrow-thin men in their 20s who appeared even tinier in the baggy sport coats they wore to court - each faces 14 criminal charges and mandatory life in prison if convicted of piracy. The jury is expected to begin deliberations Monday.

Whatever the verdict, the trial has underscored the difficulties of combating Somali piracy in a U.S. court, especially if the men never boarded the ship. In a similar but separate case, another federal judge in Norfolk dismissed piracy charges against six other Somalis accused of firing at the U.S. Navy vessel Ashland, although they face other charges. Prosecutors are appealing, Los Angeles Times reports.