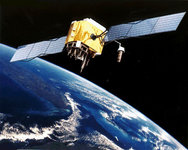 The US Air Force launched a massive spy satellite yesterday for the National Reconnaissance Office (NRO). For obvious reasons, the NRO is cagey about what exactly it's shot into space.

But the satellite is believed to be the largest in the world, and to be aimed at intercepting communications via a vast array of radio receivers and an enormous antenna.

"I believe the payload is the fifth in the series of what we call Mentor spacecraft, a.k.a. Advanced Orion," satellite tracker Ted Molczan told Spaceflight Now.

"The satellite likely consists of sensitive radio receivers and an antenna generally believed to span up to 328 feet to gather electronic intelligence for the National Security Agency," TG Daily reports.

It is believed it will help the U.S.'s eavesdropping abilities. The rocket is 235ft tall and can launch payloads of up to 24 tons into low Earth orbit.

The Delta 4-Heavy is America's most powerful liquid-fuelled rocket and generated 2,000,000lb of thrust at take-off. It has been in use since 2004, Daily Mail reports.