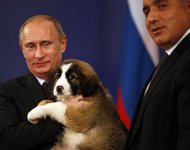 Russia Prime Minister Vladimir Putin, who was in Bulgaria to sign a gas pipeline deal, was presented with the Bulgarian shepherd dog puppy by prime minister Boyko Borissov.

Putin already has an 11-year-old black Labrador, called Connie, which was given to him by Sergei Shoigu, the emergency minister.

During Mr Putin's visit, the two countries agreed to speed up the construction of a 2,200 mile pipeline to carry Russian gas to Europe, Telegraph.co.uk reports.

Putin's puppy love was in the news recently when it was revealed that he told President George W. Bush that his dog was "bigger, stronger, faster," than Bush's Scottish terrier.

While known for his dour public persona and macho posturing, Putin's pooch cuddling showed a softer side of the Russian premier. Vote below on which picture shows the pet-loving PM at his warm and fuzziest, according to Huffington Post.