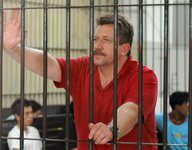 The U.S. says Bout, a former Soviet air force officer, ran an air cargo network that shipped weapons to conflict zones from Afghanistan to Rwanda. 43-year-old Bout has repeatedly denied wrongdoing, saying he was framed by U.S. undercover agents who posed as Colombian rebels during his arrest in Bangkok two years ago, Bloomberg reports.

Bout was arrested at a Bangkok luxury hotel in March 2008 as part of a sting operation led by U.S. agents. The head of a lucrative air transport empire, Bout had long evaded U.N. and U.S. sanctions aimed at blocking his financial activities and restricting his travel. He claims he ran a legitimate business and never sold weapons, and fought hard to avoid extradition.

"This is an unequivocally political decision, lobbied by the U.S. government," Bout's wife Alla said in Bangkok, according to televised remarks on Russia's NTV network. "It has no legal basis whatsoever", according to The Associated Press.