Up to 40,000 sudents protest against triple tuition fees in London 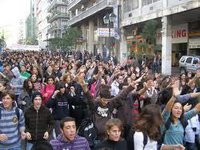 The biggest demonstration against the coalition Government has taken place in London with up to 40,000 students and lecturers protesting against controversial plans to triple tuition fees.

Banner-waving students stood alongside lecturers as they marched along Whitehall at the start of the huge demonstration showing their anger, particularly against the Liberal Democrats. Students from towns and cities across the UK travelled to London in coaches, with big university cities including Liverpool, Newcastle and Birmingham well represented, The Press Association says.

The protesters want to persuade the Government to back down on plans to allow universities to charge tuition fees of up to £9,000 a year from 2012.

Banner-waving students marched and chanted alongside lecturers to show their anger at the planned 300% increase, according to Sky News.