Obama leaves Indonesia because of volcano, flies to South Korea 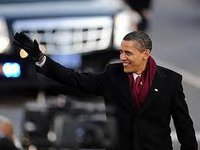 An Indonesian volcano forced President Barack Obama to cut short his visit to the country, and some international airlines again canceled flights over concerns about air safety.

Mount Merapi, hundreds of miles (kilometers) east of Jakarta, has spewed massive clouds of ash and gas high into the air for more than two weeks, killing at least 153 people and causing travel chaos and at times forcing two nearby airports to shut down.

Obama sliced several hours off his whirlwind 24-hour tour Wednesday and flew to South Korea for the Group of 20 summit, The Associated Press reports.

Recent eruptions of Merapi, which started on October 26, have killed at least 156 people, officials at Sardjito hospital have said. The eruptions also have displaced an estimated 200,000 people.