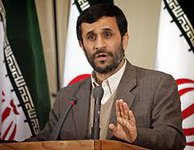 Iran will make any concession over its nuclear rights and the Islamic state will only talk about international problems, Ahmadinejad said in a televised speech in the central city of Qazvin.

"Iran is ready to hold talks on equal conditions to help settle ongoing problems, ease international concerns and establish peace and security in the world," he said, adding the Islamic Republic will never talk about its absolute rights, Xinhua informs.

President Mahmoud Ahmadinejad spoke Wednesday, a day after Iran offered to resume nuclear talks with six nations - the United States, Russia, China, Britain, France and Germany. The talks collapsed last year and Ahmadinejad's comments raise further questions about whether Iran is willing to reopen the dialogue on its nuclear program.

The U.S. and its allies suspect Iran's nuclear program is aimed at producing weapons, though Iran denies this, The Associated Press says.