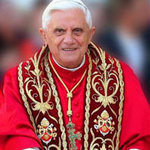 The 83-year-old pontiff strongly defended conservative family values and condemned abortion in Barcelona on Sunday as he held a ceremony consecrating the Sagrada Familia basilica, a monument to the holy family.

"The generous and indissoluble love of a man and a woman is the effective context and foundation of human life," he said in at a mass in the basilica, attended by some 6,500 faithful including King Juan Carlos and Queen Sofia and watched on screen by thousands more at La Monumental bullring.

Sagrada Familia, a spectacular cathedral designed by Catalan architect Antoni Gaudi, has been under construction for 128 years and is not expected to be completed before 2025. Gaudi was a devout Catholic who Benedict said "kept the torch of his faith alight" and "lived in dignity and absolute austerity," according to Deutsche Welle.

It was the second time in as many days that Benedict had criticized the policies of Spain's Socialist government and called for Europe as a whole to rediscover Christian teachings and apply them to everyday life.

As he headed to the church named for the sacred family, about 200 gays and lesbians staged a 'kiss-in' to protest his visit and church policies on homosexuals, condom use and a host of other issues. Church teaching holds that gays should be treated with dignity and respect but that homosexual acts are "intrinsically disordered," according to The Associated Press.