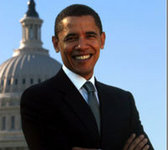 U.S. President Barack Obama faced a bleak political landscape on Wednesday after voters punished Democrats for the sluggish economic recovery and handed control of the House of Representatives to Republicans.

Democrats managed to retain control of the Senate even as Republicans strengthened their ranks, which could herald an extended legislative stalemate when the new Congress begins work in January, according to Reuters.

Republicans won a majority of governorships and made big gains in state Legislatures, giving the party greater influence in redrawing congressional districts next year.

The party will control 25 Legislatures, including Ohio, North Carolina, and Minnesota boosting their power in statehouses by the most since 1928, according to the National Conference of State Legislatures.

Republicans won the House and Senate in Alabama for the first time since the end of the Civil War. Republicans won governors' seats from Democrats in Michigan, Pennsylvania and at least eight other states.

"Regardless of the gains Republicans make in the House of Representatives tonight the fight for House continues next year," said Mississippi Governor Haley Barbour, chairman of the Republican Governors Association in a news release early this morning.

"By controlling a majority or more of reapportionment states we can make sure that the Democrats don't take from us tomorrow, what we fought so hard for today," Bloomberg reports.