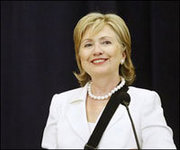 The U.S. and Japan sought to ease tensions with China fueled by territorial disputes in waters off its coast that have hindered talks on currency and trade policies before a Group of 20 summit next month.

Japanese Prime Minister Naoto Kan told reporters he met for 10 minutes today with Chinese Premier Wen Jiabao after a spat over a disputed island chain in the East China Sea scuttled more formal talks. Secretary of State Hillary Clinton offered to host a meeting to mediate between the two sides while repeating a U.S. legal obligation to defend Japan's claims.

"We've encouraged both Japan and China to seek a peaceful resolution of any disagreement," Clinton said in a speech in Hanoi, where she attended a regional summit with Wen, Kan and 15 other Asia-Pacific leaders. "It's in all of our interests to have stable, peaceful relations" between China and Japan, she said, according to BusinessWeek.

Relations between Japan and China began to deteriorate last month when Japan's coast guard detained a Chinese fishing boat captain after he plowed his trawler into two coast guard vessels near the Senkaku Islands.

The islands, controlled by Japan, have long been claimed by China, which calls them the Diaoyus. In response, China canceled a series of meetings with Japanese officials and stopped exporting rare-earth minerals, crucial to Japan's economy. Japan then released the captain.

The escalation of the spat into one involving an export blockade worried Washington, especially because China has a near monopoly on rare-earth exports. Rare-earth minerals are 17 elements vital to the manufacture of high-tech products ranging from cellphones to the U.S. military's precision-guided munitions, Washington Post reports.