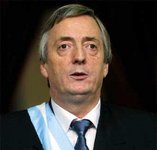 Former President Nestor Kirchner was buried Friday in the southern city where he was born, ending two days of mourning that saw tens of thousands of Argentines fill the streets to pay their respects to one of the nation's dominant political figures.

Kirchner, who died Wednesday of a heart attack at age 60, was laid to rest in his family's small pantheon in a cemetery in Rio Gallegos, capital of southern Santa Cruz province where he and his wife began their political careers.

The only people allowed at the private ceremony were Fernandez, the couple's children Maximo and Florencia, close government officials, and Venezuelan President Hugo Chavez, the last of the Latin American leaders who came to Argentina remaining in the country, The Associated Press reports.

Nestor Kirchner was president between 2003 and 2007 and is credited by many with putting South America's No. 2 economy back on its feet after a devastating 2001/02 crisis, but critics reviled his combative style and interventionist economic policies.

Kirchner's death raises questions about the government's strategy for the presidential election next October, and may encourage Fernandez to run for a second term and adopt a less confrontational stance in a bid to garner broader backing.

"History will rightly remember him as one of the best presidents of the last 50 years," said Ricardo Garcia, 52, a lawyer who joined tens of thousands of supporters in front of the famous pink presidential palace, Reuters says.