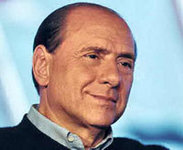 Silvio Berlusconi today denounced as "media trash" a rapidly growing controversy over his links with a 17 year-old Moroccan girl.

Three close associates of the Italian prime minister were earlier reported to have been made suspects in an investigation into the alleged aiding and abetting of juvenile prostitution.

One of the three, a nationally famous television newscaster, Emilio Fede, said he was unaware of being under investigation, but said he had met the girl at the centre of the affair at Berlusconi's home, The Guardian reports.

The girl, who has only been identified as Ruby, said she had a sexual encounter with the 74-year-old leader at his villa.

Ruby said she attended parties at his home in Arcore. At the time the girl claims that she had been trying to break into modeling or television work.

The media mogul turned prime minister would have been breaking Italian laws by hiring a juvenile for prostitution but prosecutors say that while they have opened a dossier on the claim, he is not under official investigation.

Judges looking into the allegations said Ruby's accounts of the alleged events were somewhat contradictory and held that she had made claims that were later retracted.

The Italian premier has been accused of similar affairs on many occasions in the past. Recently in May 2009, his wife announced she was divorcing him because of his infidelities, according to Press TV.