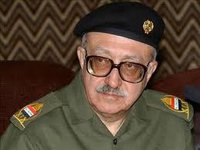 Iraq's high tribunal Tuesday passed a death sentence on Tareq Aziz, once the international face of dictator Saddam Hussein's government, over the persecution of Islamic parties, the court said.

The death sentence was the first to be handed down to Aziz, who was well known in foreign capitals and at the United Nations before Saddam's downfall. He rose to prominence at the time of Iraq's invasion of Kuwait and the 1991 Gulf War, when he was foreign minister, Reuters says.

Aziz is entitled to appeal, a process expected to last months, and he has previously said he expects to die of ill-health in prison. If the Appeals' Court upholds the death sentence, the law says Aziz should be hanged within 30 days of the final decision. The Iraqi president also needs to sign off on an execution order.

Also sentenced to death were two other Saddam henchmen, including Abid Hamid Mahmud al-Tikriti, Saddam's closest aide. He was the Ace of Diamonds in the pack of cards of "most wanted" regime figures issued after the allied invasion of March 2003, Telegraph reports.