Communication between 50 nuclear missiles lost at Warren Air Force Base 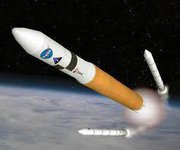 An equipment failure disrupted communication between 50 nuclear missiles and the launch control center at Warren Air Force Base in Wyoming over the weekend, an Air Force spokesman said Tuesday.

Lt. Col. Todd Vician said the break occurred early Saturday and lasted less than one hour. The White House was briefed about the failure Tuesday morning. There was no evidence of foul play, and the Air Force never lost the ability to launch the missiles, officials said, The Associated Press reports.

There was no danger of an accidental launch, officials said, and the Air Force had eyes on the missiles at all times. "There was no threat to the public," said the defense official. The cause of the power failure remains un known, but it is not believed to be malicious.

Adm. Michael Mullen, the chairman of the joint chiefs of staff, notified Defense Secretary Robert Gates of the incident. The incident was first reported by the Atlantic on its website on Tuesday.

Another official said the cause of the incident was being analyzed. "The missiles were protected by multiple, redundant safety security and control features," said a military official, Wall Street Journal informs.