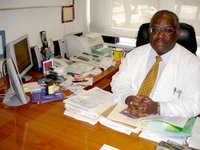 An African immigrant was being dubbed the 'Slovenian Barack Obama' Monday, after winning a run-off election at the weekend for the post of mayor in the Adriatic resort of Piran.

Peter Bossman, 54, came to former Yugoslavia in 1977 to study medicine, expecting only to visit.

Instead he made Slovenia his home, married a Croat colleague doctor - with whom he has two daughters - and started a private medical practice.

"I have no ambitions at a state level," says Peter Bossman. "I've already told my patients I'll be back in my practice. I could not quit my medical career."

The national media are beside themselves after Bossman, a Social Democrat, beat the town's incumbent mayor, the independent Tomaz Gantar, in a close-run election on Sunday, winning 51.4% of the vote against Gantar's 48.4%, News24 reports.