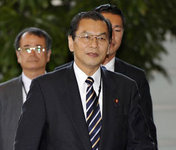 Japan lodged Monday a formal complaint with China after two Chinese patrol boats were sighted near a chain of disputed islands in the East China Sea, the center of a recent diplomatic row between the two countries.

The trade minister, Akihiro Ohata, also quoted a top Chinese official as acknowledging that customs officials had stepped up inspections of all rare-earth shipments from China.

Industry officials said last week that China had quietly halted some shipments of the materials to the United States and Europe, despite denials from Beijing of an official embargo.

Mr. Ohata said the Chinese vice minister of commerce, Jiang Yaoping, who was visiting Tokyo for an energy conservation forum, had told him that Chinese customs had strengthened checks of all rare-earth exports, not just to Japan, as a "countersmuggling" measure. But Mr. Jiang reiterated that there was no international trade embargo, Mr. Ohata said, New York Times informs.