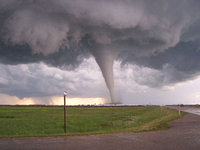 Navarro County Sheriff Leslie Cotten said Sunday's storm caused an unknown number of injuries, although News 8 had not received any reports of anyone who had been seriously hurt, KENS 5 TV reports.

According to CNN, authorities in northeast Texas were assessing damage Monday morning after a possible tornado destroyed homes, knocked train cars off their track and injured at least four people.