World's longest tunnel, 57 kilometers long, about to be complete 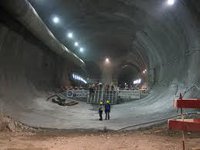 A giant drilling machine was punching its way through a final section of Alpine rock on Friday to complete the world's longest tunnel, after 15 years of sometimes lethal construction work. The 57 kilometre (35.4 mile) high speed rail link, which will open in 2017, will form the linchpin of a new rail network between northern and southeastern Europe and help ease congestion and pollution in the Swiss Alps.

It is the third tunnel to be built through the snowbound St. Gotthard area but it is much the longest and three kilometres longer than a rail link between two Japanese islands, the current record holder, AFP says.

Trains will be able to speed through the tunnel at 250 kilometers an hour, shortening the four-hour train journey between Zurich and Milan by a quarter.

The Gotthard link through Switzerland has been one of the most important connections between northern and southern Europe since a 15-kilometer rail tunnel that took a higher route across the Alps was completed in 1881. About 200 people died during that project, including its Swiss chief, Louis Favre, and four laborers who were shot by police to end a strike, Bloomberg reports.