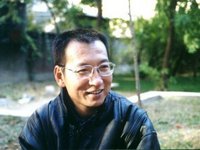 The 2010 Nobel Peace Prize has been awarded to Liu Xiaobo, a leading Chinese dissident who is serving an 11-year prison term, the Norwegian Nobel Committee announced Friday.

Liu was sentenced in 2009 to 11 years in prison for inciting subversion of state power. He is the co-author of Charter 08, a call for political reform and human rights, and was an adviser to the student protesters at Tiananmen Square in 1989, CNN reports.

In a statement, the Nobel Committee said Liu, 54, was awarded the prize "for his long and non-violent struggle for fundamental human rights in China."

Liu is serving his sentence at Jinzhou prison in Liaoning, hundreds of miles from his home and wife, Liu Xia, in Beijing. His wife reacted to the news by expressing her thanks that Liu's physical condition seems to have improved in jail, that he's allowed to read and that the two can exchange regular letters.

"We have no regrets," she said. "All of this has been of our choosing. It will always be so. We'll bear the consequences together. I've known Liu since 1982. I've watched him change little by little year by year, and we know that we have to pay the price under the current situation in China," Washington Post reports.