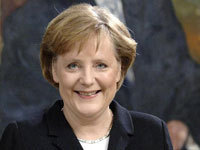 Germany president Christian Wulff is marking the 20th anniversary of the country's reunification - celebrating its increasing sense of national pride while also stressing the importance of integrating immigrants.

President Christian Wulff said at the main anniversary event Sunday that reunited Germany has developed "an uninhibited patriotism, an open commitment to our country," according to The Associated Press.

Chancellor Angela Merkel and President Christian Wulff joined other political figures in Bremen to mark the occasion which has now become a public holiday.

President Wulff had earlier looked to the future, calling on his countrymen to work to integrate the country's four million Muslims, acknowledging that Islam was now part of a modern Germany.