16:34
Alexander Lukashenko gives Vladimir Putin a tractor for birthday
15:26
Zelensky says too much about preemptive strikes on Russia and hides
14:34
Kremlin responds to reports about disagreement with Putin about special operation
14:02
Dependent Western media digging their own grave
18:54
Newsweek: The West should respond by eliminating Putin and Russia
16:52
The Russian army responds to explosions of Nord Streams pipelines
15:27
Chairwoman of Federation Council of Russia urges Ukraine to negotiate
14:58
USA will stop supplying arms to Ukraine when Europe goes bankrupt
14:37
Can the world renounce nuclear weapons for the sake of global peace? 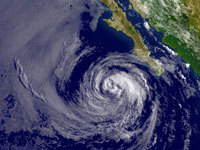 Newly formed Tropical Storm Nicole soaked much of Cuba on Wednesday while causing floods and landslides that toppled bridges, knocked out power and killed at least two people in hard-hit Jamaica.

The storm had sustained winds of 40 mph (65 kph) and it was not expected to grow much further as it passes over the ocean east of Florida on a track that could carry it over parts of the Bahamas by evening, according to the U.S. National Hurricane Center in Miami.

It said the sprawling system could still cause heavy rains and spawn tornadoes in Florida, however, The Associated Press reports.

Nicole has since become untrackable, according to a National Hurricane Center advisory at 5 p.m. East Coast time.

"The weather forecast hasn't changed much, you just can't attach a name to it," Erickson said. "Regardless whether Nicole existed or not, the situation was going to remain the same, a tremendous amount of tropical moisture is coming up the East Coast."

Flood watches are now posted from South Carolina to New Hampshire in advance of the storm, according to the National Weather Service, Bloomberg says.