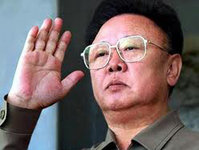 North Korea has said its biggest political gathering in 30 years is under way and crucial developments are expected, hours after leader Kim Jong Il appointed his youngest son as a military general in what was seen as part of a succession plan.

State TV said in a broadcast monitored in Seoul, South Korea, that the elder Kim was reappointed as general secretary of the Workers' Party at the delayed political gathering. Kim had been expected to appoint his youngest son, Kim Jong Un, to key positions to groom him as his heir to power, The Press Association says.

The announcement shed little further light on the heir apparent, whose identity and even existence has been the one of the secretive regime's closest-guarded secrets, and little is known about him.

Kim Jong Il, 68, is visibly ailing, believed to have suffered a stroke two years ago and thought to have kidney problems, while his Swiss-educated son's age is either 26 or 27, and he may suffer from diabetes. Beyond that there is little for anyone to go on apart from reports that he most closely resembles his father for a love of movies and a ruthless streak, and speaks at least three languages, euronews informs.