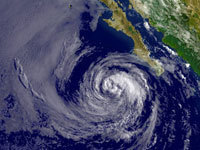 A tropical depression formed Thursday in the southern Caribbean and forecasters expected it to strengthen into a hurricane by early next week.

The initial forecast from the National Hurricane Center took the system west across the coast of Honduras and Nicaragua, then by Sunday potentially turning sharply north and skirting the Yucatan Peninsula.

That path that could put Florida or other Gulf Coast states at risk next week. But the depression, which would be named Matthew, remained far off. Long-range forecasts could shift significantly before then. Some models suggest the system will continue west across the Yucatan, MiamiHerald.com reports.

Tropical Storm Matthew is moving quickly westward toward Central America and is expected to be near the Nicaragua/Honduras border later today.

Matthew, which could become a hurricane today, is moving toward the west at 17 miles per hour (28 kilometers per hour) with maximum sustained winds at 45 mph. It is currently 275 miles east of Puerto Cabezas, Nicaragua, according to BusinessWeek.