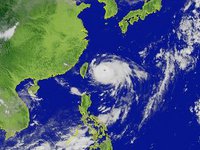 Floods and landslides due to heavy downpours brought by typhoon Fanapi have claimed 18 lives as of 11 a.m. Wednesday in south China's Guangdong Province, while another 48 remain missing, local authorities said Wednesday, Xinhua reports.

Meanwhile, in Yangchun city, flooding caused three deaths, left eight others missing and forced the evacuation of nearly 19,000 of its inmates.