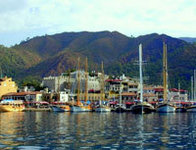 As many as 25 British tourists are feared injured after a catamaran crashed into a dock on the Greek holiday island of Kos.

The ship, called Aegean Cat, was travelling from the Turkish resort of Didim to Kos with 213 passengers, most of them from the UK. Five passengers were seriously hurt and 20 sustained minor injuries.

According to Ministry of Mercantile Marine in Greece, none of the injuries are thought to be life threatening, Sky News reports.

The Greek Ministry of Mercantile Marine said the port authority in Kos was investigating the incident.

"The ship was trying to get into the port of Kos when it crashed," added a spokesperson, "we don't know how it happened."

There were no reports of bad weather at the time of the crash, with local mayor David Gerasklis stating the boat had been hit by mechanical failure.

"Some of the passengers apparently got up to see what happened, and they were injured in the second crash," he added, Breaking Travel News says.