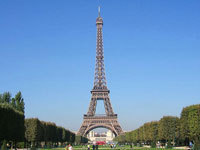 The Eiffel Tower and its immediate surroundings were evacuated Tuesday evening after an anonymous caller phoned in a bomb threat, but explosives experts scoured France's most-visited monument and found nothing suspicious, Paris police headquarters said.

Parts of a second tourist hub - the Saint-Michel subway station near Notre Dame Cathedral - were briefly evacuated following a similar threat, police said. The station was the target of a terrorist attack in 1995 that killed eight and injured scores of people, The Associated Press reports.

Some 2,000 people had to leave the Tower and surrounding area after an anonymous telephone threat was reported. Subsequent police searches with sniffer dogs failed to find any devices.

The anonymous warnings were taken particularly seriously because of the proximity to the September 11th anniversary, and came amid tensions in France over the vote banning the full-face Muslim veil, euronews says.