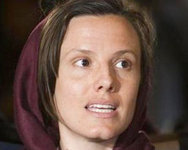 Iranian authorities have released Sarah Shourd, one of three Americans held for more than a year in Iran, her attorney confirmed Tuesday.

"She is free," attorney Masoud Shafii said. "She is coming out of prison right now." According to Iranian law, Shourd, 32, may leave Iran but is obliged to return for future court proceedings, Washington Post says.

The national prosecutor in Tehran, Abbas Jafari-Dolatabadi, said Sept. 12 that Iran was ready to free Shourd on bail of $500,000. Shafiei said he saw a document stating that the bail had been paid by Shourd's family, and that he was unable to give further details. Authorities had delayed her scheduled release on Sept. 11, citing incomplete legal procedures.

Shourd was arrested on July 31, 2009, along with Americans Shane Bauer and Josh Fattal, for illegally crossing into Iran from Iraqi Kurdistan. The U.S. government has said the three mistakenly wandered across the border during a hiking trip. Bauer and Fattal remain in detention, Shafiei said, adding that he will follow up on their cases, according to BusinessWeek.