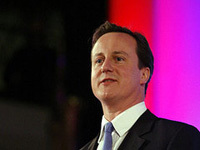 David Cameron's father died today after a suffering a stroke on holiday, shortly after the prime minister arrived at his bedside at a hospital in the south of France where he was being treated.

Downing Street confirmed that Ian Cameron, who was 77, passed away after being admitted to hospital suffering a stroke and heart problems.

Friends said Cameron was "relieved" to have been at the bedside, and was "pleased" that his father died peacefully during a "happy family holiday", The Guardian reports.

Ian Cameron was said to have been "proud" to see his son become Prime Minister, and had visited both 10 Downing Street and Chequers. The family's holiday plans had prevented him meeting his new granddaughter before now.

Ian Cameron, who was 77, was born with a disability that required several operations on his legs. Despite going on to have both legs amputated and losing the sight in one eye, he had forged a sucessful career as a stockbroker, Telegraph says.