An estimated 50,000 people attended the 15th anniversary of the massacre in Srebrenica, during which the remains of 775 identified victims were buried on Sunday at the Potocari Memorial Center, just outside the town of Srebrenica, reported Radio Sarajevo. 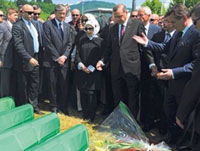 The worst massacre in Europe since World War II began on July 11, 1995, when Bosnian Serb forces overran the UN designated safe haven of Srebrenica, occupied by Bosnian Muslims. Approximately 8, 000 men and boys were killed in the aftermath. This day is observed as the national day of mourning in the Federation of Bosnia and Herzegovina (BiH), the Bosnian Muslim and Croat dominated entity of BiH, Xinhua informs.

Sunday's burial was attended by top international officials, including a U.S. delegation whose members read a statement from President Barack Obama. In the statement, Obama called the Srebrenica massacre an "unimaginable" tragedy that has left an indelible "stain on our collective conscience."

"Fifteen years ago today, despite decades of pledges of 'never again,' 8,000 men and boys were murdered in these fields and hills," said in the statement, CNN reports.