Israeli Defence Minister Ehud Barak was on Monday holding a face-to-face meeting with Palestinian prime minister Salam Fayyad at a hotel in Jerusalem, officials on both sides said. 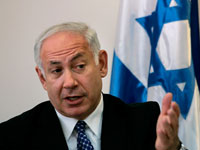 The two were meeting at the King David hotel on the eve of talks between Israeli Prime Minister Benjamin Netanyahu and US President Barack Obama at the White House.

Palestinians officials insisted the two would not discuss any issues related to the ongoing indirect peace negotiations, and said the focus would be on security coordination on the ground, AFP reports.

The meeting at Jerusalem’s King David Hotel will take place a day before Prime Minister Benjamin Netanyahu travels to the U.S. for a White House visit with President Barack Obama.