Secretary of State Hillary Clinton is expected to respond to a flurry of pro-Russian moves by Ukraine's new leadership by signaling renewed U.S. interest in the ex-Soviet republic during a visit on Friday. 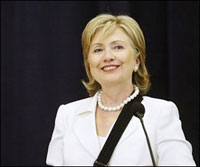 Kicking off a five-country regional tour, Clinton arrived in Kiev in the early morning hours of Friday, the first trip to Ukraine by a top U.S. official since President Viktor Yanukovich was elected in February, ousting pro-Western leaders and tilting policy toward Moscow.

Washington wants to "go beyond the notion" that central European countries "need to choose whether they're going to be pro-Russian or pro-American," Phil Gordon, assistant secretary of state for European and Eurasian Affairs, said ahead of the trip.

In Kiev Clinton is to open the US-Ukrainian Strategic Partnership Commission, which provides for increased cooperation on a range of issues including energy and trade, security and defense, and cultural exchanges, AFP says.