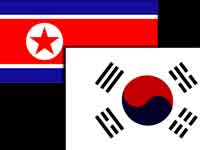 The two Koreas commemorated the 60th anniversary Friday of the outbreak of the Korean War, promoting vastly different views of the origins of the conflict that still divides their peninsula.

The war started in the early hours of June 25, 1950, with an attack by North Korean troops. The Korean peninsula had been divided in 1945 after colonial ruler Japan's defeat in World War II, The Associated Press reports.

Relations between North and South Korea have worsened markedly since the March sinking of the patrol ship Cheonan which left 46 South Korean sailors dead.

An international investigation blamed the sinking on a North Korean torpedo, but Pyongyang has rejected the allegations threatening war if it is punished over the incident, Aljazeera says.