Twelve people were killed when a high-speed train ploughed into a group crossing the tracks on their way to a beach party in northeastern Spain. Fourteen others were injured, at least three critically, in the accident at 11.23pm Wednesday at Castelldefels station, south of Barcelona as the group of mostly young people went to celebrate the annual San Juan midsummer festival. 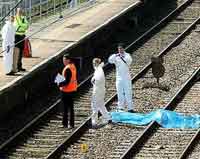 The group had just got off a train at the crowded station 14 miles south of Barcelona and chose to cross the railtrack to reach the exit rather than take the underpass, Telegraph says.

The youths — at least some of them described as Latin American immigrants — got off a commuter train in the beach resort of Castelldefels outside Barcelona shortly before midnight Wednesday to head to the party. About 30 climbed down off the platform and tried to scurry across the tracks instead of using an underpass to leave the station, witnesses said.

Seconds later, a long-distance train that was not scheduled to stop at the station barreled into the youths at high speed, its whistle shrieking, The Associated Press reports.