A senior official of the Gaza-ruling Islamic Hamas movement announced Friday that the Palestinian National Authority and Egypt have agreed to the ideas raised by the movement to complete the reconciliation and ending internal division. 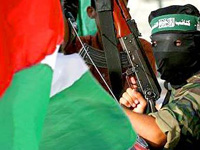 Salah Bardawil said in a statement that Secretary General of Arab League Amr Moussa has telephoned Hamas leader Ismail Haneya that there is consent principle to the proposals by the Palestinian National Authority and Egypt, Xinhua says.

The EU's foreign policy chief, Lady Ashton, urged Israel to ensure that "many, many more goods can get in to Gaza". Diplomats say privately that they fear weeks or months of negotiations lie ahead.

The knotty political issue here is that the US, Britain and the EU all insist they want to end an "unacceptable and unsustainable" blockade but share Israel's goal of seeking to weaken Hamas, which has more or less maintained a de facto ceasefire since last year's war. It still holds the captured Israeli soldier, Gilad Shalit, Guardian reports.