Pakistani and US security officials say they believe the head of al-Qaida in Afghanistan has been killed in a drone strike in Pakistan's tribal area. 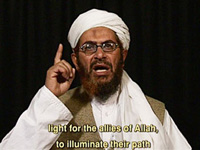 Mustafa Abu al-Yazid, a veteran Egyptian militant close to Osama bin Laden, was hit in a drone strike last month, an official with Pakistan's Inter-Services Intelligence (ISI) said. "He was killed on the 21st or 22nd, I believe," he said, The Guardian reports.

Yazid, an Egyptian, who had close links with fellow Egyptian and al Qaeda number two Ayman al Zawahiri, was a former member of the Islamic Jihad movement in Egypt and served time in jail over the 1981 assassination of President Anwar Saadat.

He was al Qaeda's main conduit to Osama bin Laden and Zawahiri, and went into hiding after the 9/11 attacks and surfaced only in May, 2007 during a 45-minute interview on the al Sabah website in which he was introduced as the officer in charge, al Qaeda's operations in Afghanistan, Outlook informs.