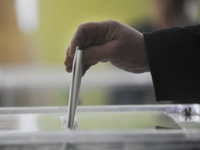 Although he fell short of the crucial 50 per cent tally which would have given him an outright win, his surprise showing of 47 percent of votes puts him in a strong position for a run-off in June, euronews informs.

Antanas Mockus, the son of Lithuanian immigrants who stressed clean government and promised a tax increase, got 21 percent. A former two-time mayor of the Colombian capital, he catapulted into contention in pre-election polls only to falter at the ballot box.

Santos , 58, is a U.S.-trained economist and the great-nephew of a president whose family long ran the country's leading newspaper. His first cousin, Francisco Santos, was Uribe's vice president. A nephew, Alejandro Santos, is editor of Semana, the country's leading newsmagazine. After serving three administrations as a Cabinet minister, he is in his first race for elected office, The Associated Press says.