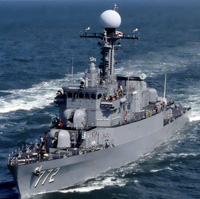 North Korea warned it would close the last road link across the increasingly tense peninsula if the South goes ahead with a threat to broadcast anti-Pyongyang propaganda into its hermit neighbour.

Tensions are mounting after the South blamed the North for torpedoing one of its warships, killing 46 sailors, Reuters says.

South Korea has suspended all trade with Pyongyang, but given how minimal this was to start with, it is hardly a crushing blow.

Even less daunting was the second part of the sanctions against the world’s most isolated, nuclear-armed dictatorship – a battery of huge digital signboards which will display rude messages over the North Korean border, Times Online informs.