The Paris art world was in shock Thursday, after French authorities revealed that a lone thief had made off with $120 million worth of modern masterpieces, including works by Picasso and Matisse, in a daring nighttime heist at the capital's Museum of Modern Art. 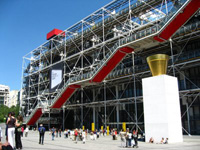 According to officials, the thief cut through a gate padlock and broke a window to gain access to the museum, all without alerting the security guards or triggering the museum's alarm system. A security camera filmed the intruder making off with five paintings, but the works were only discovered missing during morning rounds just before 7 a.m. on May 20. The stolen paintings are all priceless works by some of art's biggest names: Pastoral by Henri Matisse, Olive Tree near Estaque by Georges Braque, Woman with a Fan by Amedeo Modigliani, Still Life with Chandeliers by Fernand Leger, aand Pablo Picasso's Le pigeon aux petits-pois (Dove with Green Peas), a work from the painter's cubist period, alone worth an estimated $27 million, TIME reports.

According to Interpol organization, based in Lyon, France and Italy are the two countries mostly affected by the theft of cultural objects.

Art work theft even started France's new year. On New Year's Eve, a pastel by Edgar Degas disappeared from the Cantini museum in Marseille, several days later in January, some 30 paintings, including works by Picasso and Henri Rousseau, were carried away from a private villa in the Cote d'Azur, south France. Police are still in hunt for these losses, Xinhua says.