The man accused of plotting to kill Americans with a car bomb in Times Square appeared relaxed and obedient in his first appearance in a Manhattan courtroom, where he was told by a magistrate judge that he had the right to remain silent. 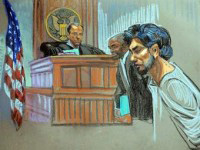 Authorities say Faisal Shahzad's willingness to talk kept him out of court for two weeks, speeding up the progress of an investigation into his May 1 plot to set off a homemade car bomb on a spring Saturday evening amidst hundreds of people enjoying the tourist haven, The Associated Press informs.

Shahzad of Connecticut purchased fireworks that he had hoped would detonate the bomb from a store in Pennsylvania, of Interstate 84, less than a mile from Port Jervis, Mid-Hudson News reports.