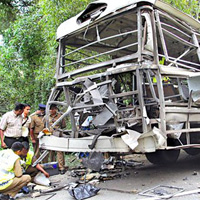 India 's government came under renewed pressure Tuesday to beef up its fight against an increasingly violent Maoist insurgency after rebels killed 35 people in a landmine attack on a bus.

Monday's explosion in the central state of Chhattisgarh tore the front off the bus, killing 24 civilians and 11 police personnel, AFP reports.

Home Minister P Chidamabaram wants a larger mandate, thought to include the use of air power to fight the Maoists. Thousands have died in the rebels' decades-long fight against the state.

Meanwhile, a two-day strike called by the rebels in protest at an offensive against them is affecting life in parts of central and eastern India, BBC News informs.