Iran announced an agreement on Monday to ship some of its nuclear fuel to Turkey in a deal that could offer a short-term solution to its ongoing nuclear conflict with the West, or prove to be a tactic aimed at derailing efforts to bring new sanctions against Tehran. 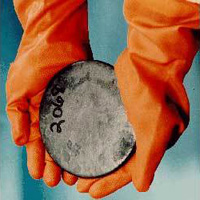 The deal, negotiated by Turkey and Brazil, calls for Iran to ship 1,200 kilograms, or 2,640 pounds, of low enriched uranium to Turkey where it would be stored. In exchange, after one year, Iran would have the right to receive 120 kilograms of material enriched to 20 percent from Russia and France. The terms mirror a deal with the West last October which fell apart when Iran backtracked, New York Times reports.

Turkish Foreign Minister Ahmet Davutoglu said the new deal meant Iran was willing to "open a constructive road." "There is no ground left for more sanctions or pressure," he told reporters in Iran, according to Turkey's private NTV television.