Soldiers fired volleys through the park railings from a vantage point just a few hundred metres from the US embassy in the heart of the diplomatic district. Two people have been killed and 45 wounded in the violence since Thursday evening. 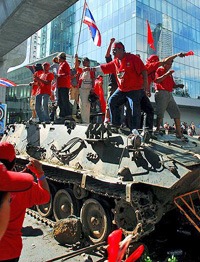 The troops are planning to lay siege to the camp, preventing Red Shirt re-enforcements reaching the area and cutting off electricity, water, and mobile telephone signals, Telegraph reports.

The fresh conflicts around the Red Shirt protesters' encampment in Bangkok's swankiest shopping district suggested that an apparent assassination attempt Thursday against a renegade army general who joined the protest movement so far has failed to break the spirit of the more militant demonstrators. The rogue commander, Maj. Gen. Khattiya Sawasdipol, remains in critical condition in the hospital after being shot in the head by an unknown marksman, while two protesters were shot and killed, amid clashes with troops. At least 12 people have been wounded, including a Thai photographer and a foreign journalist.

Red Shirt leaders accuse army snipers of singling out Maj. Gen. Khattiya, an outspoken critic of the government, for assassination. The army denies it shot him, Wall Street Journal informs.