China and North Korea have said they are committed to resuming international negotiations on dismantling Pyongyang’s nuclear weapons, but South Korea is unlikely to agree to any such talks while suspecting that the North torpedoed one of its warships. 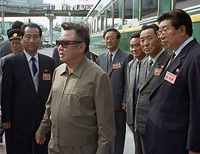 What has been confirmed this week -- thanks to the diligence of Japanese and South Korean news media -- is that Kim, 68, has not recovered from a stroke he suffered in 2008. Video clips showed him dragging his left foot as he walked, with his left arm almost motionless. He also appeared to have lost weight and hair, suggesting to some experts the effects of kidney dialysis.

North Korea watchers say they think Kim traveled to China in search of investment and aid, particularly food. North Korea's moribund economy has been squeezed by tighter U.N. sanctions, and a food shortage this spring has reportedly caused starvation in some areas, Washington Post reports.