Britain votes on Thursday to elect a new parliament in an election that could redraw the political map. Polls in Britain's razor-edge election opened early Thursday in a race that is likely to reshape the country's politics in historic ways. 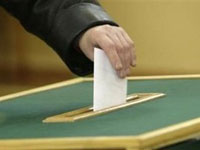 Should Gordon Brown cling to power, his Labour Party will have pulled off one of the most unlikely political comebacks in modern times. Victory for the Conservatives' David Cameron would return his once-discredited party to office after 13 years, Washington Post says.

The race is complicated by the Liberal Democrat party, headed by the younger, charismatic Nick Clegg. The relative unknown before the race gained a sizable following for his party during Britain's first-ever televised debates.

Most Labor and Conservative party leaders say votes for the Liberal Democrats will only make it harder for them to form a government.

On Thursday, a candidate for the UK Independence Party was injured when his aircraft crashed while campaigning.

Nigel Farage and the pilot suffered only minor injuries in the crash in central Northamptonshire, Voice of America reports.