A knife-wielding man attacked a kindergarten class of 4-year-olds in eastern China on Thursday, slashing 28 children in what an expert said was a copycat rampage of two other episodes at Chinese schools in the past month. 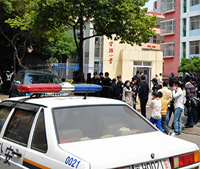 A 47-year-old jobless man, Xu Yuyuan, burst into a classroom at the Zhongxin Kindergarten early Thursday, waving an eight-inch (20-centimeter) knife and stabbing a security guard who tried to stop him, the official Xinhua News Agency reported, Associated Press says.

Only yesterday 15 children were injured when a mentally ill man cut loose in a primary school in Guangdong Province, the one nearest to Hong Kong. Also yesterday, a man was executed in the next-door province of Fujian for stabbing eight primary school children to death as they queued outside their classroom at the end of March.

Obviously there is a copycat element in these killings, but that doesn’t actually explain very much. When one hears of a horrible and senseless murder, one doesn’t normally react by saying “Ooh, that sounds like a good idea, I’ll go and do one of those”. The second and third murderers were obviously prepared to do something public and gruesome anyway, and the copycat element only influenced the form it took. But after three such episodes, it is surely legitimate to start asking whether there is something in Chinese society which tends to generate this kind of savagery, Telegraph.co.uk informs.