Iceland's main international airport is reopening after a three-day closure due to ash from an erupting volcano. 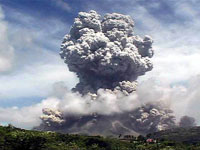 When Eyjafjallajokull erupted on April 14, the diminutive but destructive Icelandic corker did us an unheralded favor. Believe it or not, all that ash swirling into the upper atmosphere was actually a minor boon to the war on global warming.

About 11,000 European and international flights a day were canceled, and grounded aircraft don't pollute. With air travel over much of the continent slashed by 60%, CO2 emissions from aviation fell by about 200,000 tons a day, according to data from the independent British research group RDC Aviation.

Since the volcano is estimated to be issuing 150,000 tons of CO2 daily, Europe temporarily lowered its carbon footprint by about 50,000 tons a day, The Los Angeles Times informs.